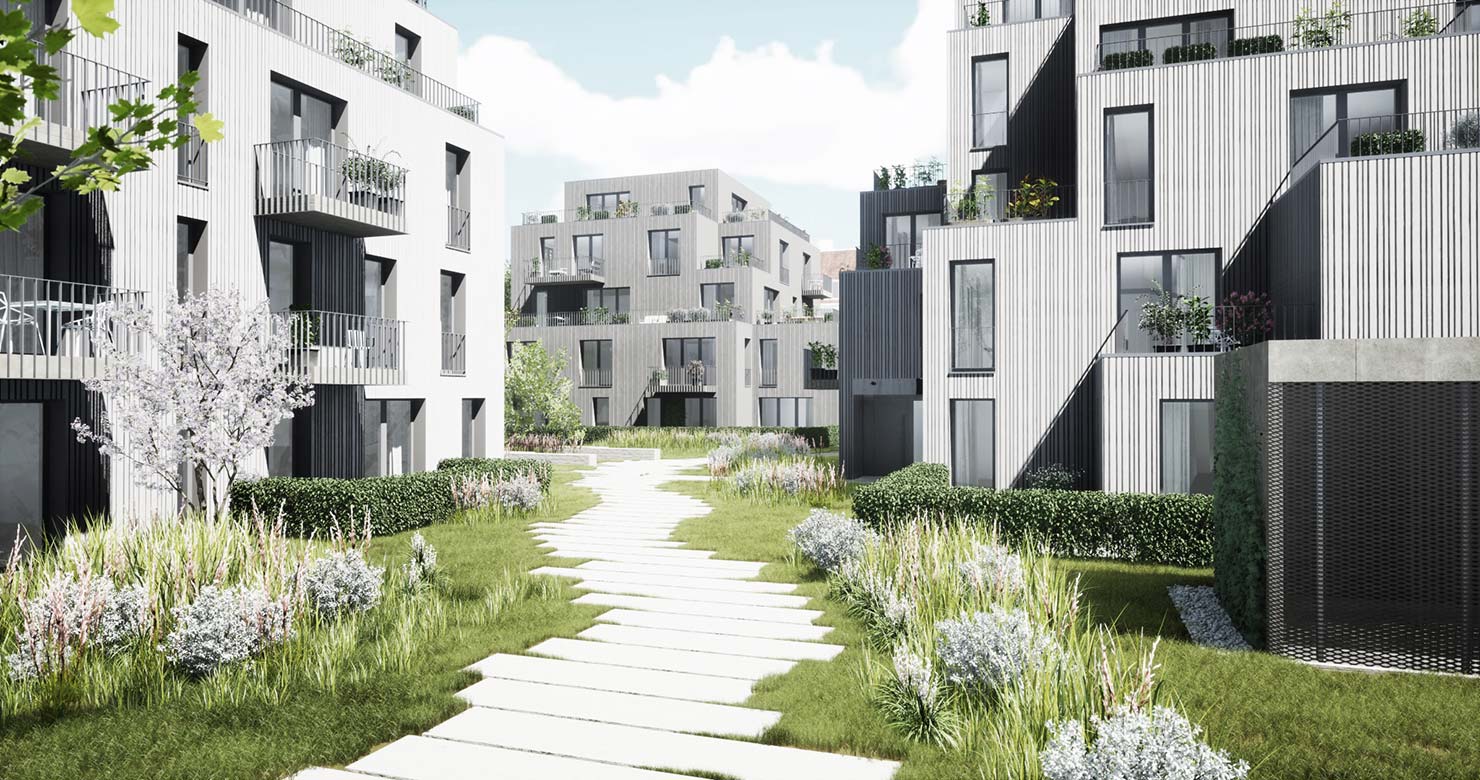 The concept of the Wallenstein Quartier project is based on three hill-like buildings which are arranged offset to each other. The height topography of the three volumes develops from a green area and follows the distance requirements. This results in roof terraces that offer a view of the neighborhood and the park. Different apartment typologies up to row houses are planned in the three buildings. 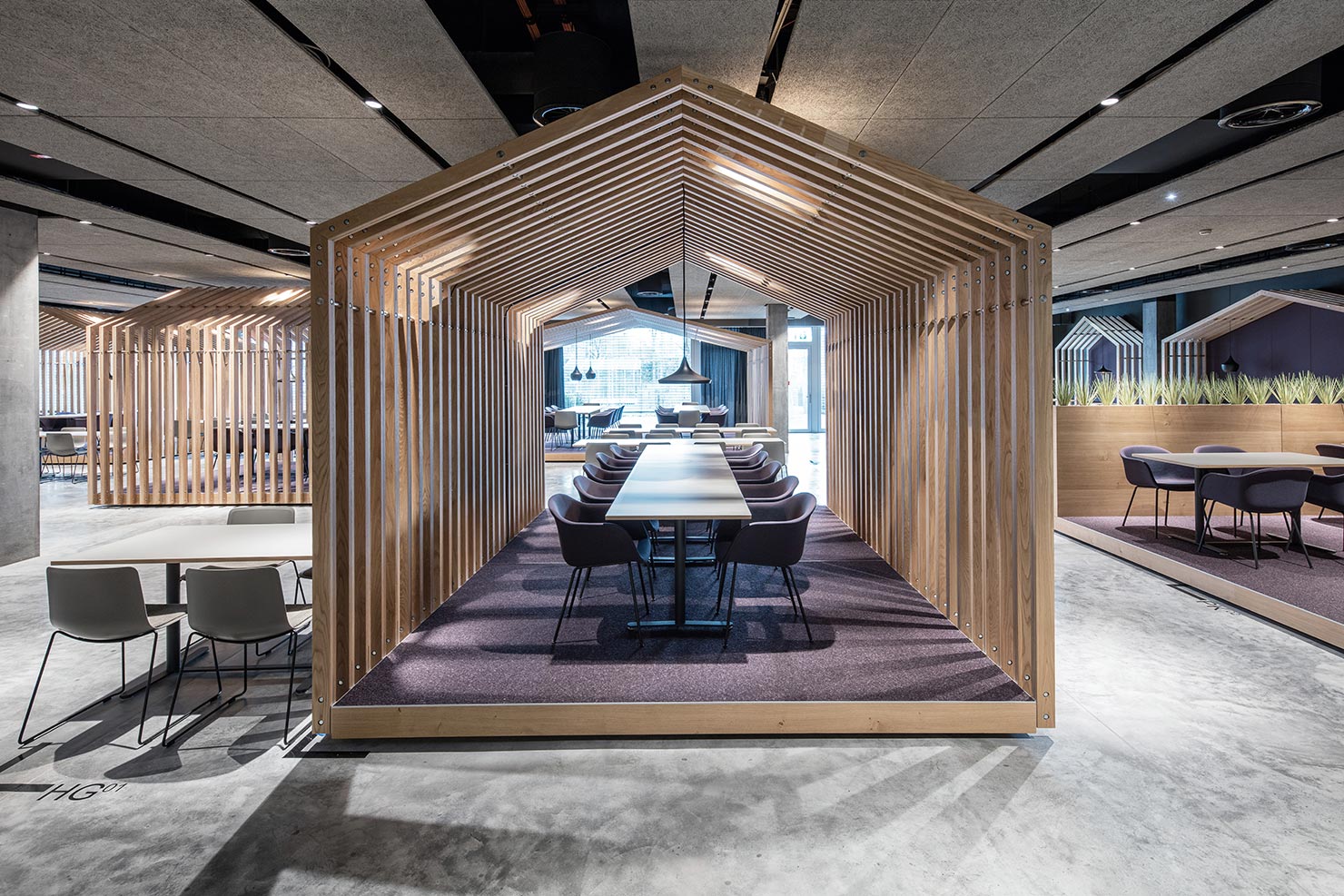 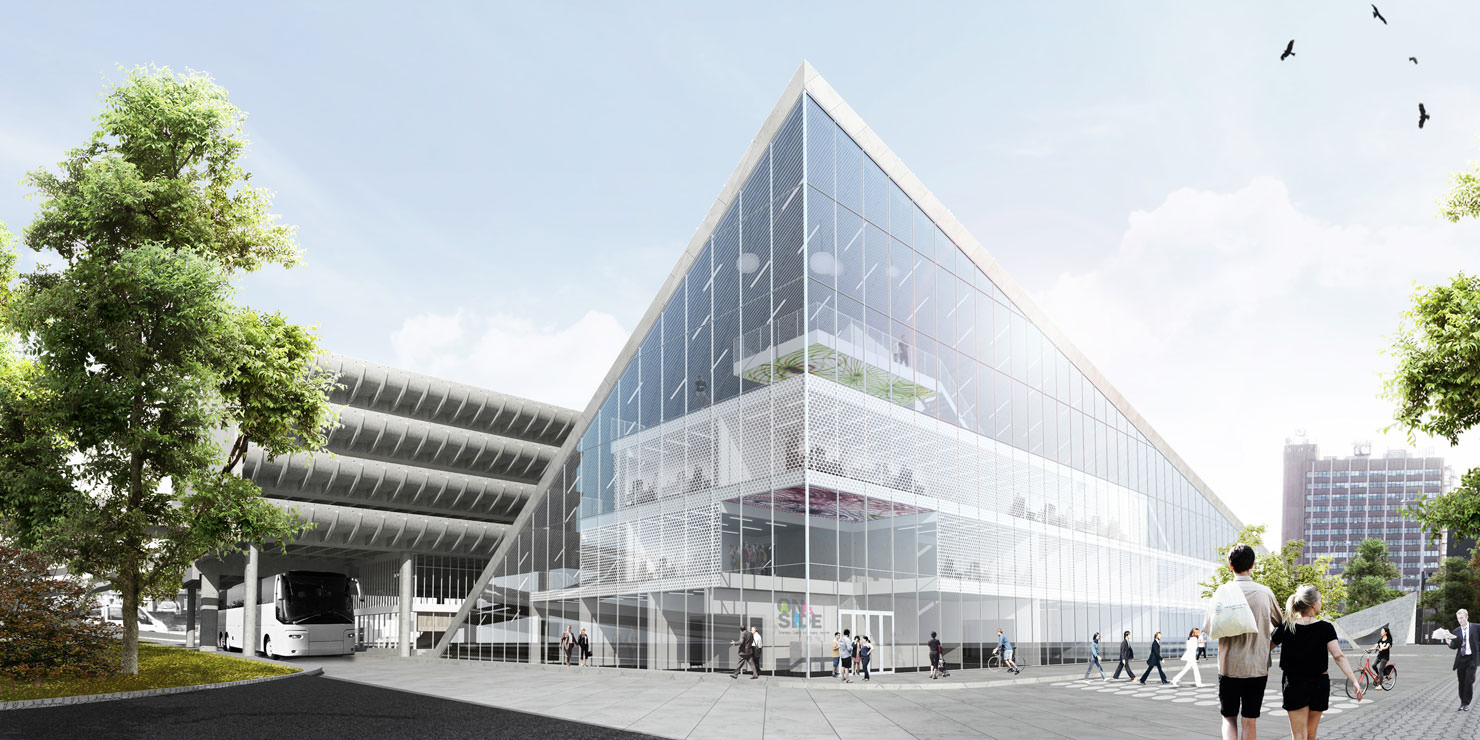 The main focus within the complexity of the new intervention around Preston Bus Station is to re-enhance it as an iconic landmark and key role-player in the urban dynamics of the city. Therefore, the proposal for the whole site, whilst introducing a strong new image for the site, derives from a very simple gesture that doesn’t harm the existing building.

The first step is the demarcation of an area that encompasses the Bus Station. It acts as an urban platform, emphasizing its importance as an essential public feature in Preston. Also, it delimits a distinct new pavement in the city landscape, absorbing sidewalks and also car lanes, communicating a unique quality to that area, where people can not only commute, but also meet and stay.
This platform is also the base element for our volumetric strategy. By cutting out and lifting up corners on opposite ends of the western apron of the Bus Station, new facades are created, that open up to the city and, at the same time, hide themselves from the view of the existing building, never touching it. The resulting triangular shapes allow for smooth transitions and balanced relationships between the elements of the composition. Being asymmetrical and having different heights, they meet the need for a larger, iconic new facility on the north end, but also for a smaller but essential marking on the south end, a new beacon for the people coming from the city centre through Lord Street. Also, the two buildings become the limits of a distinct plaza, a kind of canyon that widens up to the Bus Station, always allowing for a full view of its iconic façade. To the outside of the site, the plaza relates to St. John’s Centre’s main entrance and allows the flow from the existing park between Old Vicarage and Lord Street, strengthening its relationship with the Guild Hall and the other urban highlights at the other end of the park.

The draft for the Collider Activity Center in Mladost includes the design of the building itself as well as the design of the park. The open urban space has been fragmented into subject areas. The most important theme stripe accommodates the Collider Activity Center building itself. The building insulates the park from the street to create a calm regenerative area.
The impressive folded outline has a high recognition value and imposes the building to be a landmark. The combination of all uses in one compact space, an efficient and tight usage of the allowable footprint guarantees the cost and energy efficiency of the complex.
The building does not only contain the possibility of climbing inside, it also provides the opportunity to climb along its southern facade.
The different units in the building are simple cubic rooms to provide the framework for a flexible, multi-functional usage. The separation of the uses is partially repealed by visual connections among the different facilities and as well between the inner and the outer space.
Simple materials and constructions approve functionality and flexibility. Short ways facilitate the daily business and the usage by the visitors. 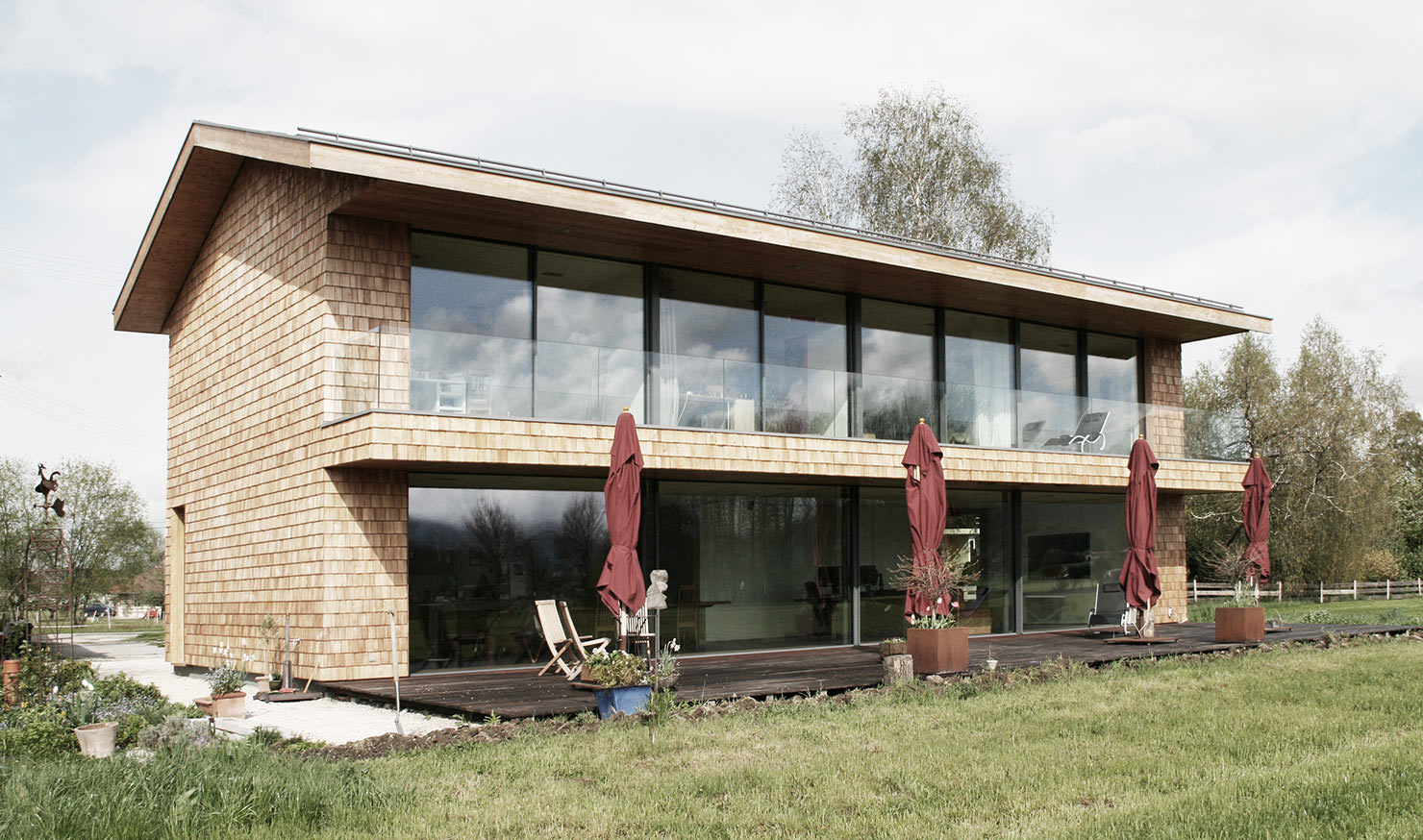 The building is based on a clear design concept. The client, an enthusiastic mountain climber, wanted the broadest possible view of the Wendelstein mountain across from the building. Due to the impossibility of building on the upstream fields, the building will always offer an impressive view of the mountain chain from nearly all rooms. The back of the building is mainly closed off, only necessary windows perforate the facade.

The timber frame construction was covered by split larch shingles on the outside. The garage pushes into the main house as a concrete square. The entire southwest side is designed as a sliding glass facade. The living room is extended into the exterior area through the large, frameless sliding elements. 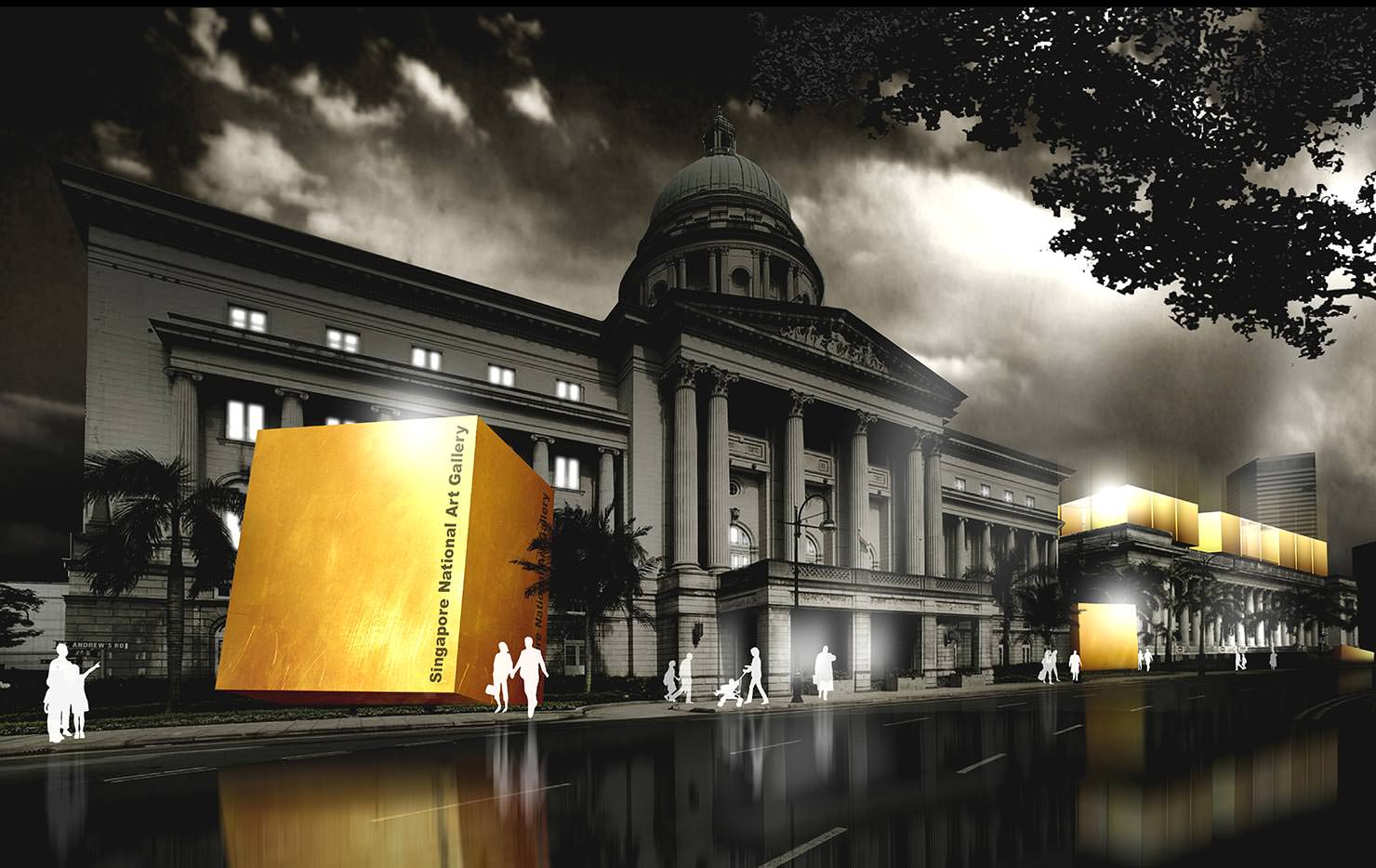 The significance of the new National Art Gallery is made perceptible by a significant, shimmering ART CASE on the roof of the City Hall. The ART CASE consists of a modular combination of cubes which build a large-scale space. Various ART CUBES break away from the ART CASE and get through the existing buildings in a playful way. The reciprocal effect of the surroundings and the Singapore Art Gallery with its ART CUBES continues from the inside to the outside. Single ART CUBES flow out of the building transporting art as landmarks into public space. They dock at significant places of the city and open up for passers-by, hereby attracting attention and triggering interest in the Gallery.The ART CUBES are the key to the gallery opening the door to art. They offer space for interaction, e.g. in changing exhibitions with young artists, small galleries or installations. 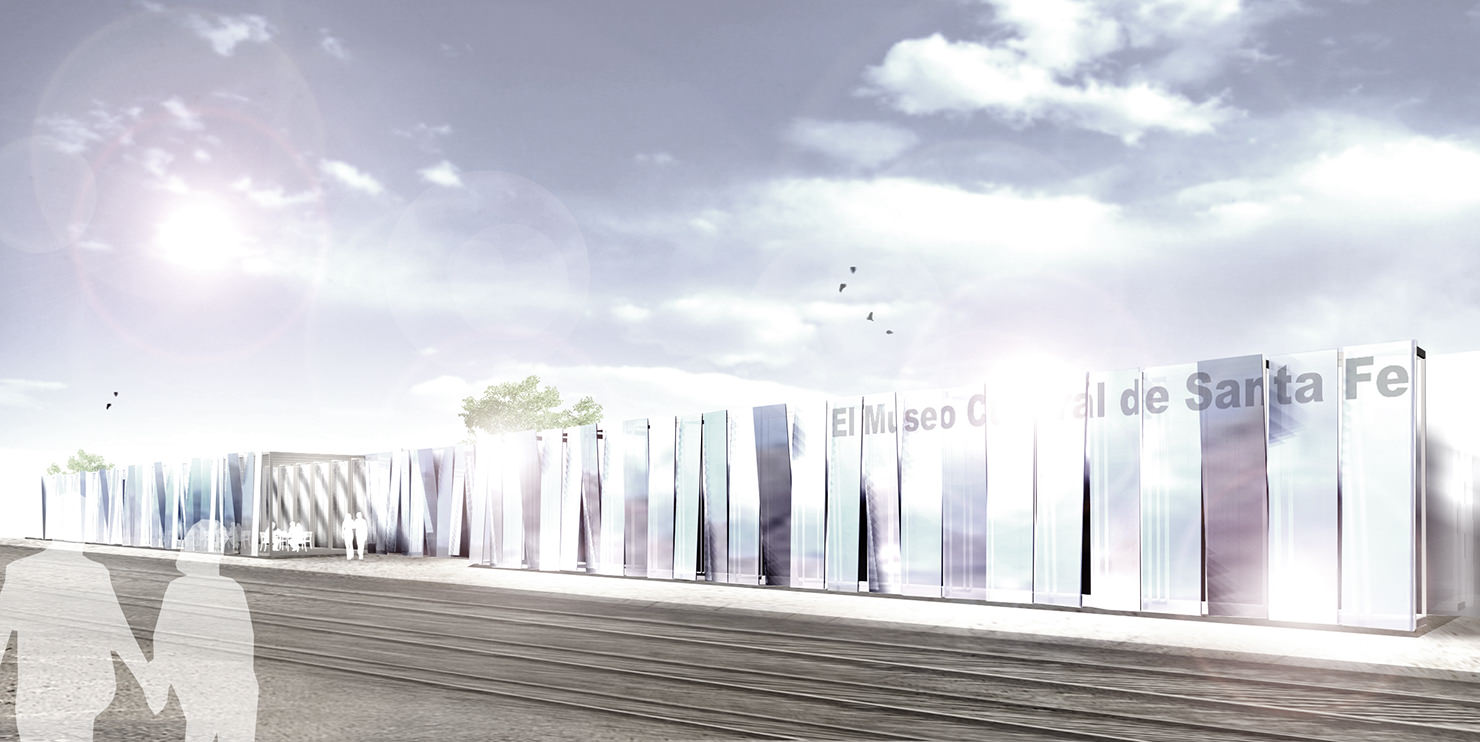 The concept is based on the idea to create a façade that changes its appearance depending on weather and light conditions to refer to the environments of the site. Because of the reflecting panels, the sky, the soil, the buildings, the people, the colours, everything will by mirrored like a huge picture. The viewer gets the impression of an abstract, surreal image that changes dynamically according to viewpoint. The façade will never look like the same and intensifies the atmospheres of day and night time in a spectacular way.
By moving the new façade partially away from the existing façade, two open, multifunctional spaces will be generated which transform the plain vertical skin of the building into a walkable space between. These areas can be used both as a temporary extension for outdoor events or exhibitions of the museum and terraces for café or restaurant. 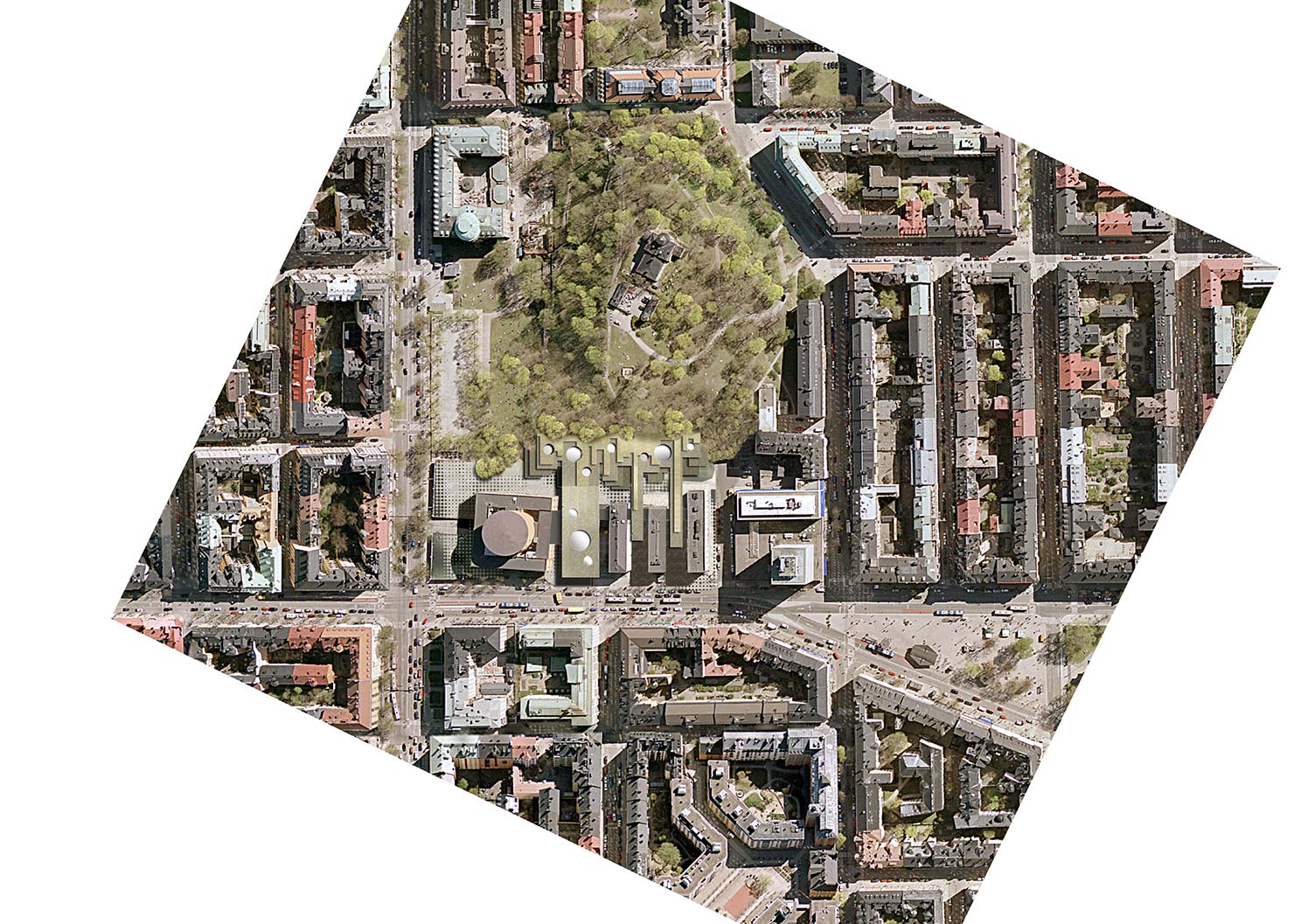 Instead of tearing down the smaller existing building, the design envisages the sensible incorporation of the new cubage into the existing building structure. In the form of fingers and bridges, the building grows out of the park landscape and intermeshes with the main and auxiliary buildings. Beams of light bring daylight deep into the building’s interior and give the room rhythm.

The concept of the facade design is based on thoughts concerning “proportionality”, “ambivalence”, and “identity”. A homogeneous, encasing “dress” gives the building a unified material language. The building receives a new proportionality through the structure of the facade due to the alternating tilted, perforated panels. This creates a link to the old Giesinger train station and gives it an upgrade in its appearance. Due to the continuous glass facade on the ground floor, a base area emerges as a horizontal break, lending the building a floating character. In cooperation with Stadler + Wild. 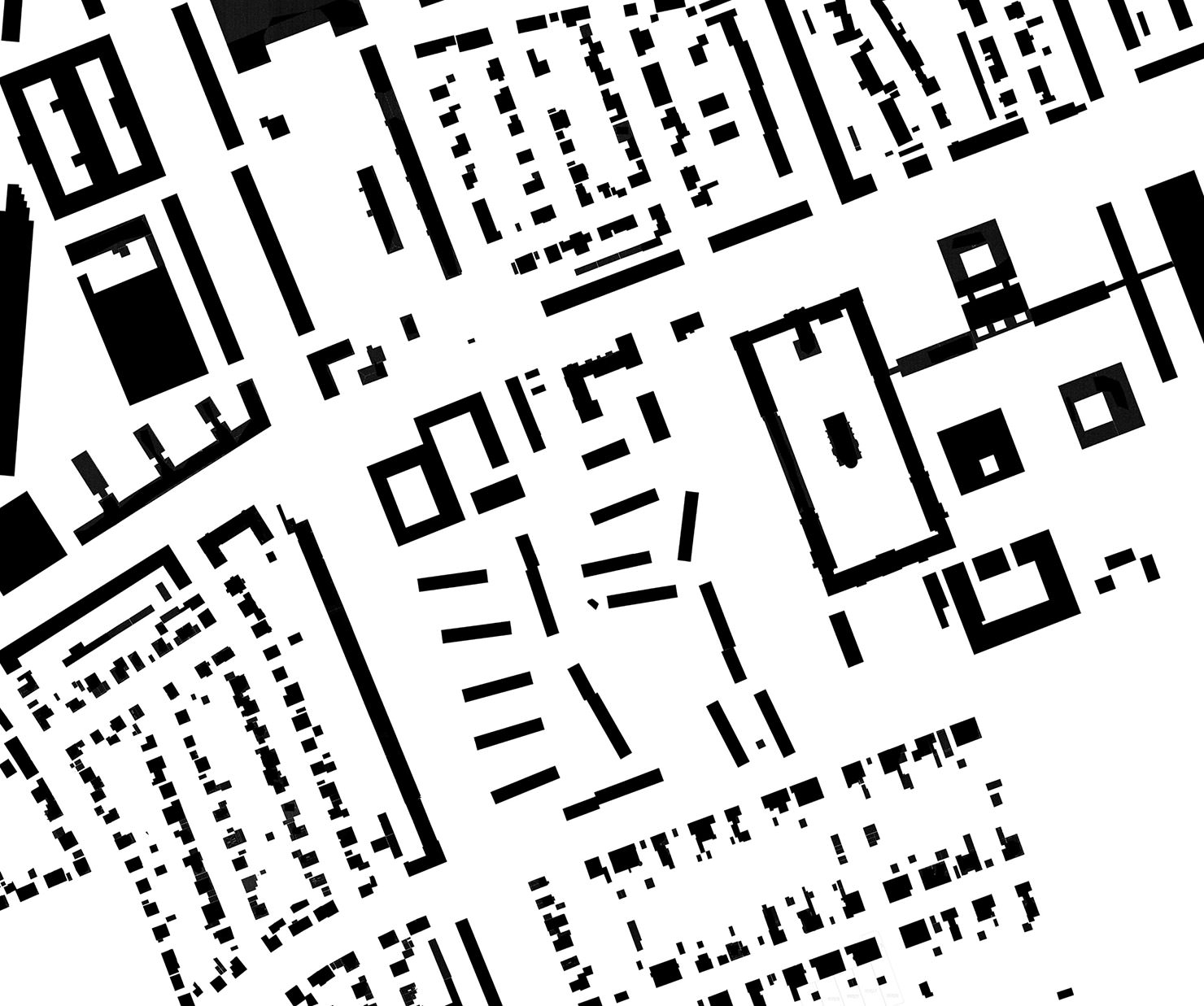 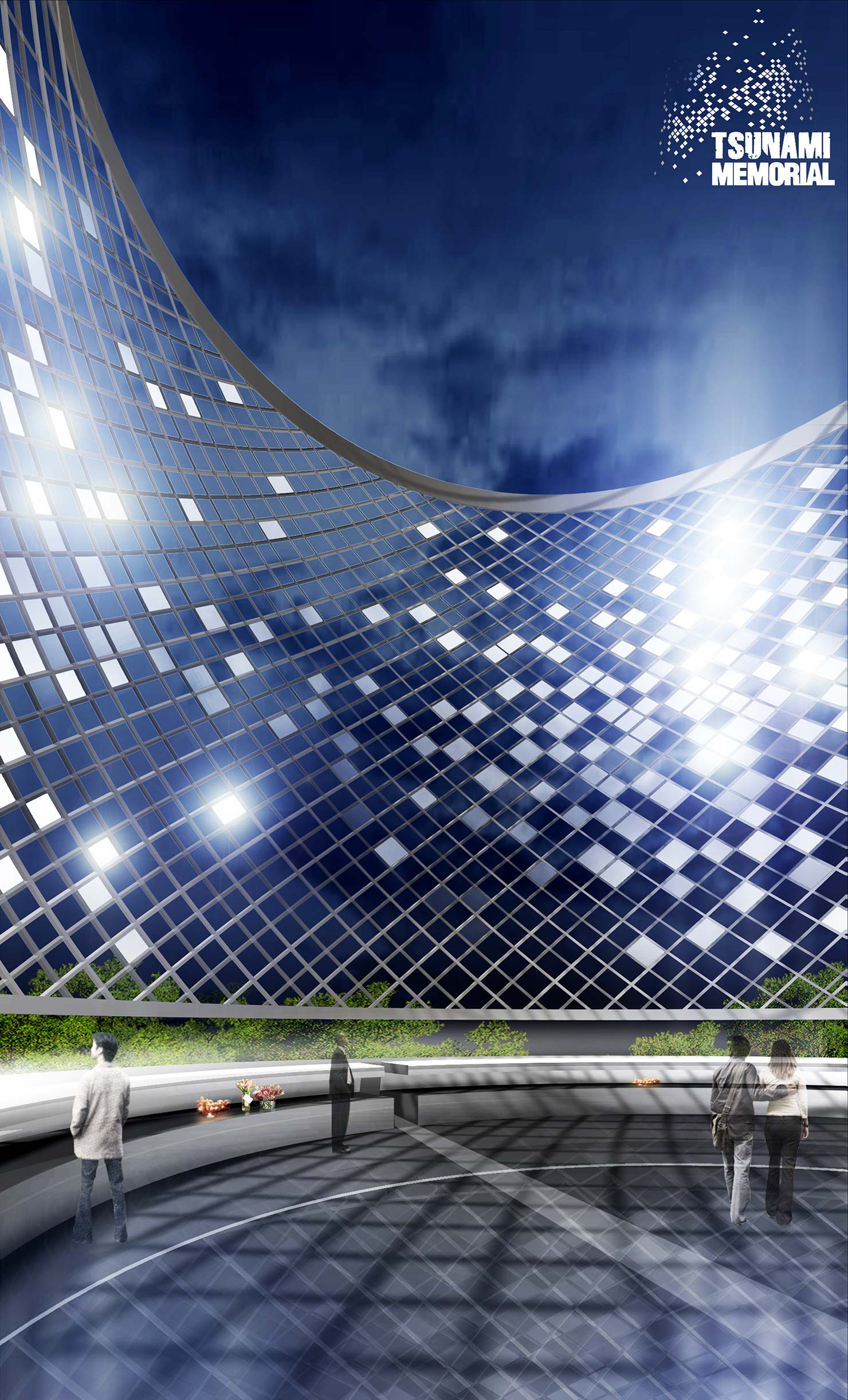 The idea of the masterplan is to design three different sculptures inside the competition boundaries to create a space of nature and architecture, of silence and contemplation, science and culture, artificial and natural. The sculptures will be a tower (Museum/Memorial), a platform (Visitor Center, Learning Center, Conference area) and a cave (parking). The tower placed at the coast looking like a lighthouse over the Andaman sea and the beautiful surrounding green of the Khao Lak-Lam Roo National park. The platform in the south west of the site is embed in the trees and lifted up from the ground to preserve the nature. The parking-cave between the Visitor Center and Highway No.4 keeping the cars from the site-surface under the ground. 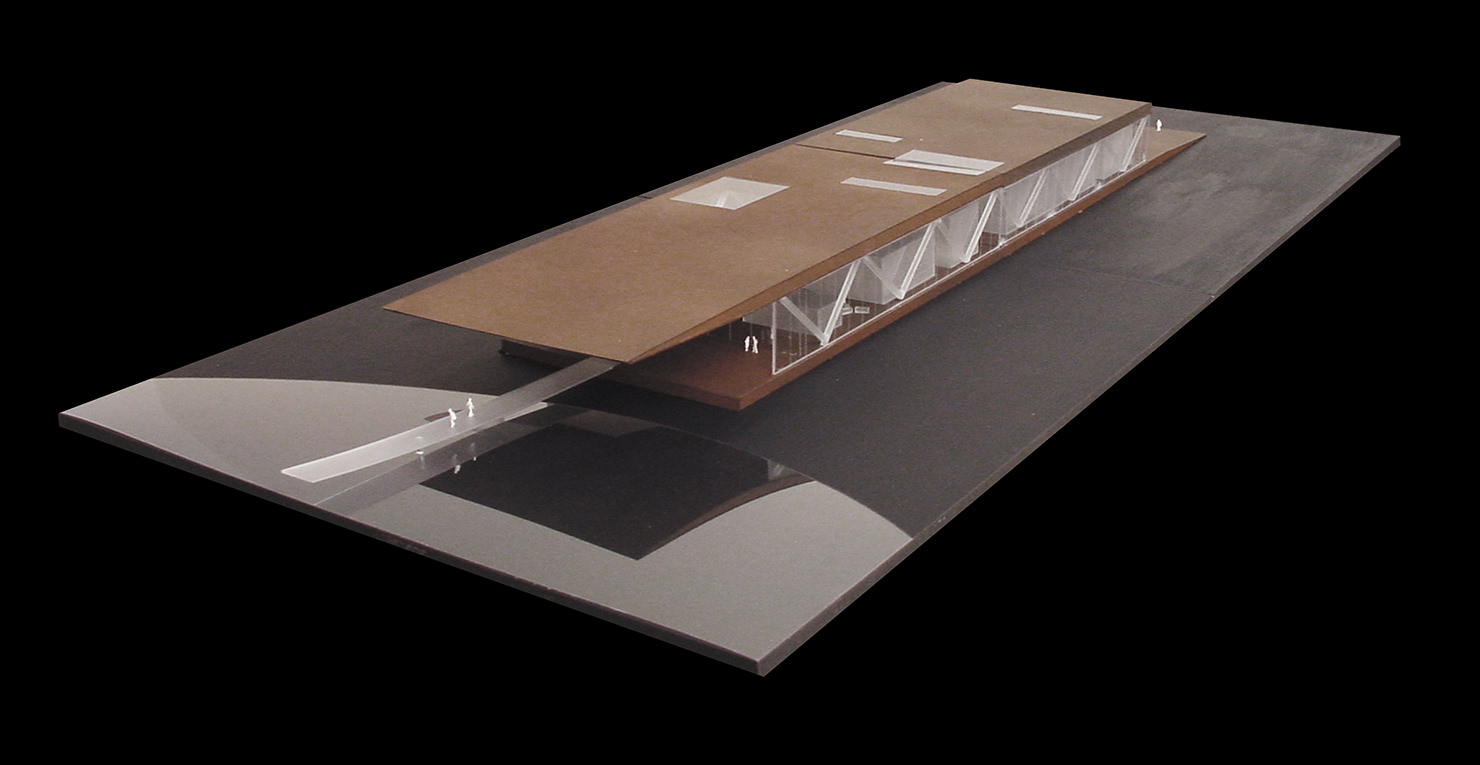 The building exists of clear and visible elements: two shifted platforms which form the floor and the roof of the museum; translucent facades and cubes inside which contain the exhibition. The visitor enters the building in the north over a ramp. Passing the entrance hall he reaches the exhibition area of the museum. The content of the exhibition is shown chronologically from past to present and future. Beside the public spaces there are two cubes with internal uses at the north and the south of the building (administration in the north and research center in the south). Over the cafeteria/lounge in the south of the building, the visitor can continue his way into park. 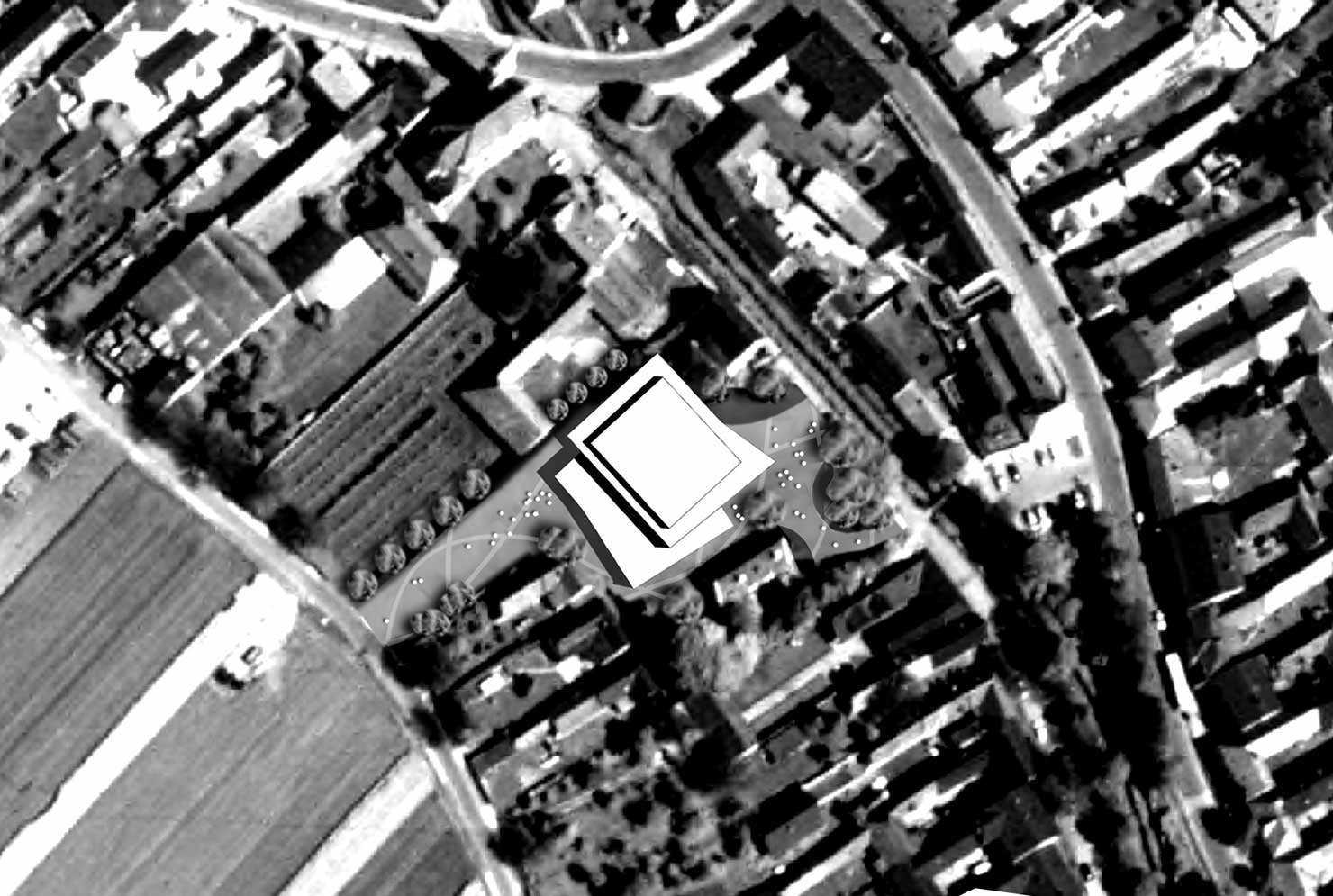